As I was scrolling through my pictures of the cavalry monuments at Gettysburg, I decided to post a few. While nowere near the photographer that Mannie is, I was pretty happy with several of the shots.

At the same time, being in an interrogative frame of mind lately, I thought I'd ask peoples' opinions on the best cavalry monument at Gettysburg. After a good bit of deliberation, I narrowed my list down to these six. All votes count, and I'll determine who the winner is on Wednesday. If you have a nomination that isn't shown below, simply send a picture, and I'll add it.

The nominees are listed in numerical order, with the exception of the first one:

17th Pennsylvania Cavalry. The carbine barrel has been replaced, but I didn't think it fair to hold that against it. The monument for the 16th PA is the same with the original barrel, but I can't seem to find that one. 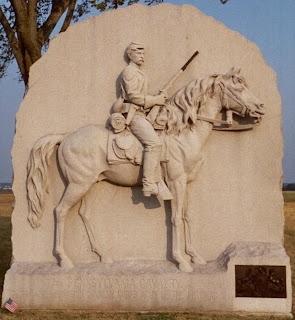 1st Massachusetts Cavalry. I liked the relief of the horse's head, and it's the only horseshoe that I recall seeing on one of the monuments. 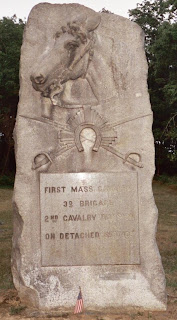 6th Ohio Cavalry. I thought this image might have been more appropos on the 1st Vermont Cavalry monument, given their relative roles during the battle. 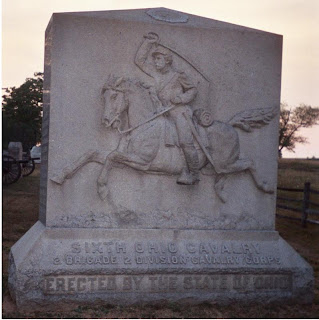 8th New York Cavalry. I liked this one, and wanted to include at least one monument with metalwork relief instead of marble. I really liked the inscribed motto of "Discovering the Enemy" as well. 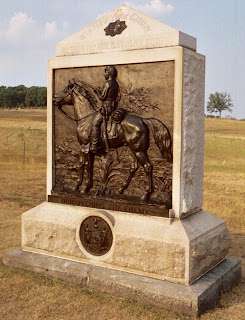 8th Pennsylvania Cavalry. Definitely one of my favorites, though I'm not sure how he's going to get his horse off of that tree stump.... 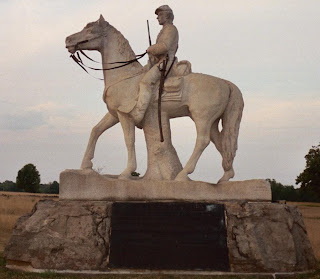 12th Illinois Cavalry. Very similar to the monument for the 8th Illinois, but I preferred the side view of the saddle to the frontal view at the top of the monument. There will be more about this regiment on this blog in the future, as they were one of the regiment that broke out of Harper's Ferry prior to Antietam. 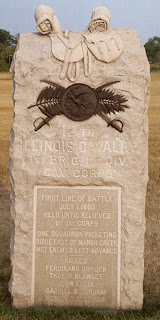 Once again, all votes are welcome, and feel free to nominate others. East Cavalry Field is not currently represented, I think they were eaten when my hard drive crashed.

Okay, I'll start with a vote for the 8th Pennsylvania.

And one vote in absentia from Chris Swift at Yankee tirade for the 1st Massachusetts Cavalry.

And Eric's chimed in with a nomination and vote for the 6th Pennsylvania Cavalry over on his blog.

Why won't anyone vote here? Are we still having technical difficulties?

The monument to the 16th Pennsylvania Cavalry sits on Highland Avenue. To get to it, take 116 toward East Cavalry Field. Turn right onto Highland just before you get to Route 15 Bypass. Go half a mile or so, and you will find it on your left.

The monument is of a dismounted, standing vidette. It is not an equestrian figure in any sense or fashion.

This is definitely one of the least visited monuments on the battlefield.