A Trip to Gaines Mill 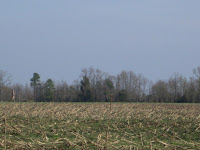 Frustrated in attempts to reach Maryland earlier in the weekend, my wife and I hopped in the car and drove to Gaines’ Mill yesterday afternoon. It shouldn’t have taken me this long to travel 40-odd miles, but I wasn’t sure until recently whether there would be anything there to see or not.

The Gaines Mill battlefield is more or less co-located with the Cold Harbor battlefield, or at least the portions owned by the NPS are. There is a small visitor center there which supports both battles. It has a small bookstore, which has several copies of Michael Hardy’s Battle of Hanover Court-House. There is a 180 acre parcel for Cold Harbor which includes both walking trails and a driving tour, while the Gaines Mill portion consists of a 60 acre parcel with a parking lot and walking trails.

The purpose of my visit was to find the site of the cavalry charge by the 5th US Cavalry near the end of the battle. They attempted a long (roughly 275 yards) charge against advancing infantry, and it didn’t turn out well for them. Of the 220 troopers who made the charge, 58 were killed, wounded or captured. There was a good bit of controversy over the charge after the battle and after the war, so I wanted to take a look at the ground.

Unfortunately, the site of the charge isn’t included in the Park Service parcel, but the park ranger on duty was very helpful and went above and beyond in drawing a map for me and showing me how I could get to a vantage point to see where that land is (located on the Adams farm, which is still in the family as it was during the battle). The family's house at the time was located next to where the charge took place, and one of the chimneys is still standing. The ground itself has since sprouted trees, so it is difficult to get a feel for what the area looked like. The picture is taken from north to south, and the charge would have taken place from left to right from the chimney just inside the woods as you look at the picture.

The park ranger, Randy Cleaver, was very knowledgeable about the battlefield, patiently answering my many questions. He greatly improved my understanding of the battle, and his map and explanation made understanding the ground at the time of the battle much easier. He was even kind enough to steer us toward a historic bookseller in Richmond that I hadn’t known of.

Although brief, it was an enjoyable and educational trip. There will be more here about the charge in the coming weeks as I work my way through the material. Thanks again, Randy, for all of your help.
Posted by Don at 10:19 AM

Email ThisBlogThis!Share to TwitterShare to FacebookShare to Pinterest
Labels: battlefields