I've decided to do a brief series on the soldiers of the 6th U.S. Cavalry who were killed at the battle of Fairfield, PA on July 3, 1863. The first of these is Sergeant John Pattinson of Company M.

John Pattinson was born in Westmoreland County, England. He immigrated to the United States with his family, settling on a farm in Pennsylvania. He was working on the family farm in Carbon creek, Erie County, Pennsylvania according to the 1860 census.

He was enlisted into Company M by Captain Hays in Pittsburgh, PA on September 23, 1861. His enlistment documents describe him as 22 years old, 5’ 7 ½ “ tall, with brown hair, grey eyes, and a florid complexion. Pattinson earned promotion to Sergeant prior to the fight at Fairfield. He was wounded during the battle and later died of his wounds.

Sergeant Pattinson is buried in the National Cemetery at Gettysburg. 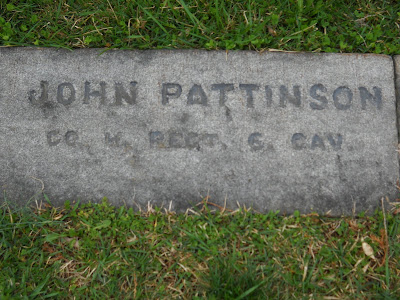