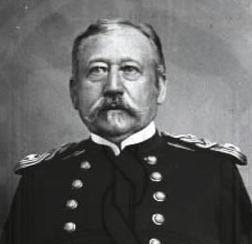 William Henry Forwood was born on September 7, 1838 at Brandywine Hundred, Delaware. He received his early education in local schools before attending Crozier Academy in Chester, Pennsylvania. He received his medical degree from the University of Pennsylvania in 1861 as the war was beginning. Forwood received an appointment as a regular army Assistant Surgeon from civil life on August 5, 1861, and accepted the appointment on August 23.

Forwood was initially assigned to Seminary Hospital in Georgetown, District of Columbia, where he served as the hospital’s executive officer until December. Over the next ten months he served initially as the regimental surgeon of the 14th U.S. Infantry and then acting medical director of General Sykes’ division, V Corps, Army of the Potomac during the Peninsula campaign. He took part in the battles of Yorktown, Williamsburg, Gaines Mill and Malvern Hill before he was reassigned to the office of the Medical Director, Washington, D.C. in October 1862.

In February 1863, Forwood was assigned to the 6th U.S. Cavalry as an assistant surgeon. Although he served in the regiment for only eight months, it was a very lively time for him.

On May 13, 1863, Forwood was accompanying acting regimental commander George C. Cram and two enlisted orderlies from General Buford’s headquarters back to their camp when they were captured by a band of Mosby’s guerillas. The group’s leader, Lieutenant Fairchild, after securing their horses and equipment, offered to release them if they would give their parole. Cram and the two soldiers did so and were released. Since medical officers on both sides had the right to be released without parole if captured, Forwood refused. Fairchild refused to release him without it, and turned him over to a guard detail as a prisoner of war. Forwood escaped into the brush while being marched away and returned to the regiment later that evening. This was quite an embarrassing incident for Captain Cram, and might be the reason Forwood spent the rest of the month on detached service at the Cavalry Corps’ dismount camp near Dumfries, Virginia. He returned to the regiment before the battle of Brandy Station.

During the Gettysburg campaign, Forwood was captured again. He was left in charge of the regiment’s wounded following the battle of Fairfield, among whose numbers was the other assistant surgeon, William H. Notson. This time he was released without incident, however, and rejoined his regiment for the remainder of the campaign.

On October 11, 1863, the 6th U.S. Cavalry was caught in an exposed position near Brandy Station and engaged by superior numbers of Confederate cavalry. They were able to fight their way back across the Rappahannock, but among the wounded was Assistant Surgeon William Forwood. The severe gunshot wound to the chest that he received in this encounter ended his field service during the war.

Following his recovery from this wound, Forwood was assigned as the executive officer of Satterlee General Hospital in Philadelphia and served there until April 1864. He spent the next two months in charge of the medical stores ship Marcy C. Day in Hampton Roads, Virginia. In June 1864, Forwood organized and built Whitehall General Hospital near Bristol, Pennsylvania. He commanded the two thousand bed hospital through the end of the war, until September 1865. On March 13, 1865 he was given brevet promotions of captain and major for faithful and meritorious service during the war.

After the war, Forwood was assigned to Fort Riley, Kansas, where he served until June 1867. He was promoted to captain on July 28, 1866, and fought a severe epidemic of cholera there later in the year. His service at Fort Riley was punctuated by several field expeditions of the 2nd Cavalry against hostile Indians along the upper Arkansas River.

Forwood was transferred to Fort Larned, Kansas in June 1867, where he served until July 1870. There was an incident at Fort Larned that says something about Forwood’s character. He apparently kept a wolf and a buffalo as pets. The post commander ordered him to get rid of the buffalo, terming it a “public nuisance.” On January 31, 1869, the post adjutant informed Captain Forwood that “complaints have also been made of the howling of the wolf at night. It is therefore directed that you have the animal removed to someplace where it will not be an annoyance to the garrison.” It is unknown what Forwood’s response was to this directive, but apparently he complied.

He was assigned to Fort Brady, Michigan until October 1872, but a good part of this period was spent on a leave of absence studying yellow fever at a quarantine station near Philadelphia. He was also married during this leave, to Mary Osbourne on September 28, 1870. He was then assigned to Fort Richardson, Texas until September 1876. The next three years brought brief assignments to Raleigh, N.C., Columbia, S.C. and Fort McPherson, Georgia.

In December 1879, Forwood was transferred to Fort Omaha, Nebraska as the post surgeon. During the next three years, he served as a surgeon and naturalist for the annual military reconnaissance and exploring expeditions ordered by General Sheridan. In November 1882 he was assigned to Chicago as the attending surgeon for the headquarters of the Division of the Missouri. He again accompanied the exploring expedition in the summer of 1883, this time in the company of President Arthur and Secretary of War Robert T. Lincoln. He published his observations from these expeditions in 1881 and 1882. He remained at Chicago until December 1886. Following another leave of absence, he then served for three years as the post surgeon for Fort Snelling, Minnesota.

On May 27, 1890, Forwood was assigned as n attending surgeon at the United States Soldiers’ Home in Washington, D.C., where he remained until December 12, 1898. He was promoted to lieutenant colonel on June 15, 1891, and was appointed the professor of military surgery when the Army Medical School was organized in 1893. From 1895 to 1897 he chaired the departments of surgery and surgical pathology at Georgetown University. On May 3, 1897, he was promoted to colonel, ranking only behind the Surgeon General in the Medical Corps. He chaired the department of military surgery at the same university from 1897 to 1898 and received and honorary degree of LL.D. for his contributions.

Forwood departed the university in the summer of 1898 to establish a large hospital and convalescent camp at Montauk Point, N.Y. to deal with the huge numbers of sick soldiers returning from Cuba. He selected the site and oversaw the construction of a similar facility at Savannah, Georgia later in the same year. In December 1898 he was transferred to San Francisco as the chief surgeon of the Department of California.

What a great man he was.

I am the webmaster of the Forwood Family Tree World Wide and he is definitely a standout amongst many. I am very proud to call him family.

A great story. Thank you.

I'm very glad you enjoyed it.

You wouldn't by chance know where his personal papers ended up, would you? I'm sure his comments would provide a unique perspective on the 6th cavalry during his time with the regiment.

No I'm sorry Don, I have no idea where they could be. I will ask around my family contacts for you, and if I here of anything, I will post a response.